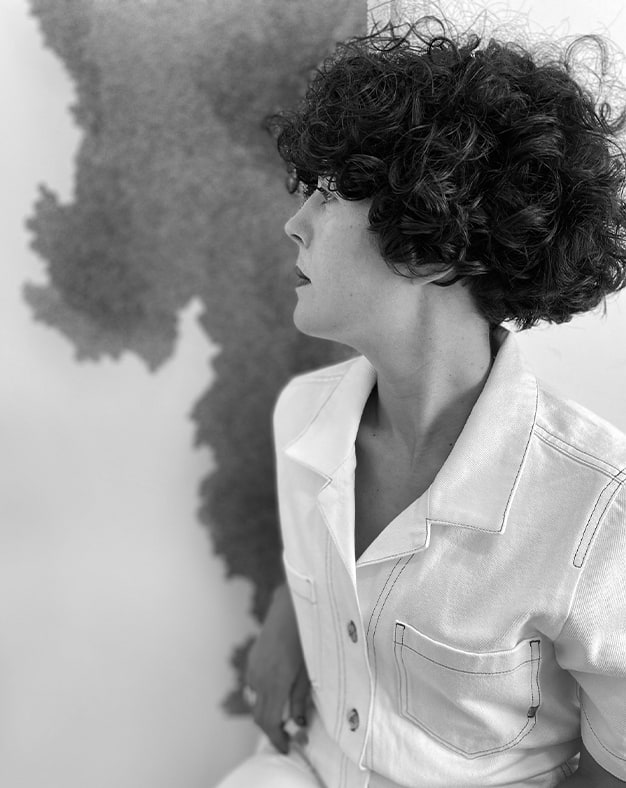 Artistic researcher and experimental hand-embroidery specialist. After studying Fine Arts at UEM University and Set Design at IED Madrid, it is in Paris at L’ École Lesage where she researched and deepended about Haute Couture embroidery techniques, a discipline that became the basis of her artistic language, within a conceptual and abstract context. As a result she created Anónima by cm, an experimental project in which the materials take prominence and the Haute Couture techniques converge with the artistic ones.

The creative process of her pieces is used as a method to talk about time and its abstract nature, trying to capture a memory or its absence.

She had exhibitions in Spain, Portugal, France and England.  As “Iberoamerican Biennial of Design”, at Matadero de Madrid. Or international projects as “The Other Art Fair”, London; The “3rd Contemporary Textile Art Biennial Guimarães – Contextile 2016”, Portugal; “Objet: cerámique et textile”, at La Manufacture Roubaix, France.  It´s in 2017 when she obtained her first Artistic Residence in France with the Odyssée Scholarship. In 2018, she exhibits at Labor_es in Galería Astarté. And 2019 begins with “Cuidado Diseño_ Artesanía contemporánea española”, official exhibition of the Madrid Design Festival. And as a guest artist at “The essence” at the VIII WTA Biennial Madrid.